Scientists and engineers from universities, research centres, agencies and companies are encouraged to present their latest findings and discuss new avenues for the nanosatellite field. 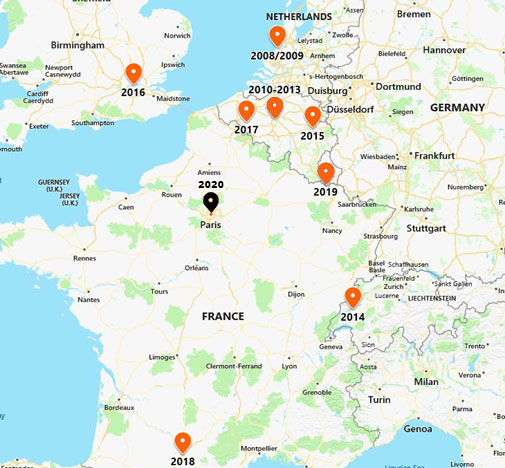 In 2009, von Karman Institute started working on the concept of the first ever network of CubeSats in orbit, leading eventually to the EU funded QB50 Project. During the feasibility study phase, one of the most important analysis was to find out which universities and institutions work on developing CubeSats. While this activity was at that time heavily based on using the knowledge of the leading individuals in the CubeSat community, it was soon realized that there was no regular event to bring the CubeSat community together. ESA had organized two symposia in the years before, which were then not further pursued by the Agency.

The von Karman Institute took then up the organization by holding the 3rd European CubeSat Symposium in Belgium in 2011 together with the first QB50 Workshop. The attention and the level of excitement was so high that it was only natural to continue the series of the symposia in the coming years.
In addition to the regular other conferences such as ESA’s SmallSat conference, CalPoly’s CubeSat Developers Workshop and other relevant events, the European CubeSat Symposium continued to be the leading international event to bring all CubeSat community together.

With increasing attention from all over the world, the 6th European CubeSat Symposium was organized for the first time in a different country, in Switzerland.

In 2015, the conference returned to Belgium and took place in Liege the home of the first Belgian CubeSat Oufti-1. In the years that followed attractive locations in where chosen in Western Europe and were organized with partners with keen interest in CubeSats or the cubesat related science. The scope of the presentations changed. Now, very credible mission concepts, flight experience were and scientific results complementing and competing with traditional satellite mission were discussed in addition to disruptive ideas. Clearly, the CubeSat concept became more mature since its inception.

This year’s edition takes place in Paris, at the Ecole Polytechniquen.

The symposium enjoys the participation of most important researchers in the field from all over the world and the support of loyal sponsors from the nanosatellite industry such as ISIS, NanoRacks etc, which is herewith gratefully acknowledged.